Between my flu last week and a day trip yesterday, I've barely sewn for a week. Today was my swim day tooand that's always a priority. 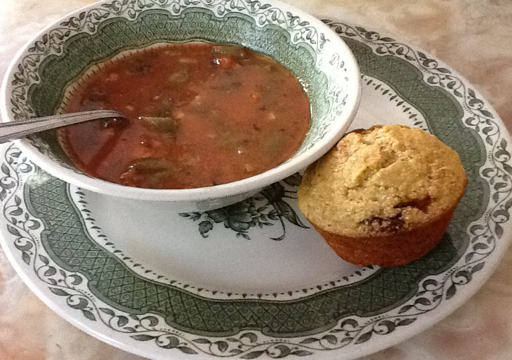 After my lunch, I made up this fish stew which I found on line.

Then I made banana cornmeal muffins to go with it.

My husband and I had it for supper, but I also took some to a friend who just had some surgery. And, for those who know me, of course I made a few changes.
The recipe called for chopped tomatoes, which I did, although not as much as was asked for in the recipe. I added some canned crushed tomatoes, a few slivered freshly picked green beans, and a can of clams plus the juice. Oh, and besides the fresh parsley, I have lots of basil, so that went in too.
Delicious! 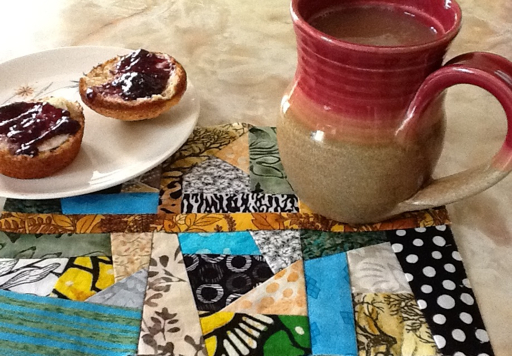 Just to get my bit of sewing fix since it's been so long, I put together the top of another mug rug from some extra squares that I pulled out of a bin. People seem to really appreciate them as gifts. I want one myself too! It will be another good little piece on which to practice some free motion.

Can I come for lunch?

Your fish stew looks so good! I will have to try it.

Fish Stew in my house would be a real adventure! Can't even imagine it -- I guess prairie people just never have enough fish to use it in a stew... maybe someday...

Fish stew...I'd like that and my son...but my husband no so much:) Mug rugs are great gifts.

Glad to see you're on the mend! Your mug rug looks fantastic.