After doing my watercolor sketch of the nest yesterday, I decided to go for a short walk to the trail last night with my camera. I wanted to check on a nest that I've been watching for a few years. It hasn't been used in that time, and is in a state of decomposition, so I decided to bring it home. When my husband saw it, he said, "you're not taking that inside too, are you?" Of course I will, but for now it sits on my little table on my deck where I can see it form my kitchen window. 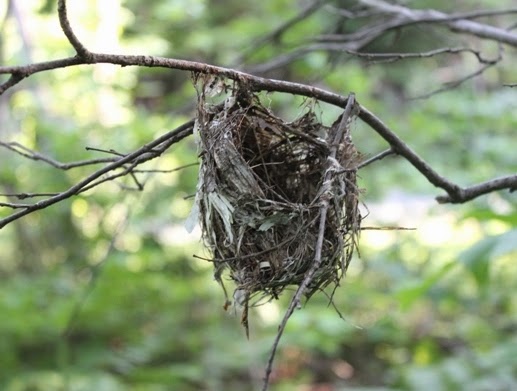 My son tells me it could be the nest of the red vireo which I corroborated on line. I've never seen one but he says they're hard to see once the trees are leafed out. The song sounded familiar though.
The deck plants are recovering nicely from the big storm on the weekend (Arthur). 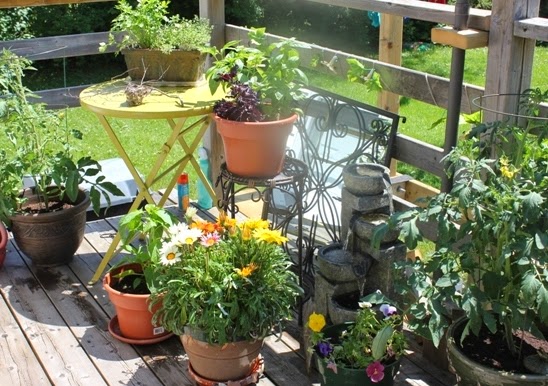 You can just spy the new wood post behind the deck. That will eventually be the width of the expanded deck. It's coming along in between golf sessions. I don't mind waiting. Gord works hard and deserves a little playtime too.
Even though it was a short walk, I spied a few interesting things. There seem to be many plants that grow in this star burst formation. I've never noticed this one before. 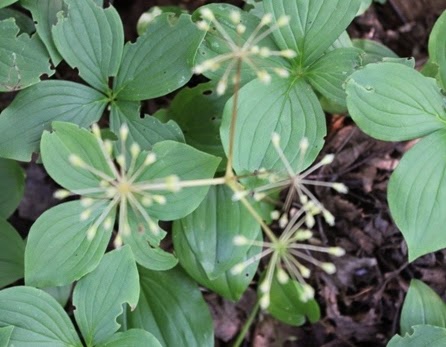 I didn't manage to get the camera to focus on them, but rather the background leaves. This is something I learned how to do in a lesson last week. Without my notes I couldn't remember
These tiny clusters of berries caught my eye. My goodness, I don't have time in the day to look up and identify everything I see!

Sometimes it is enough just to have spotted it and absorbed the beauty in the colors and tiny details.
This little patch reminded me of stardust. 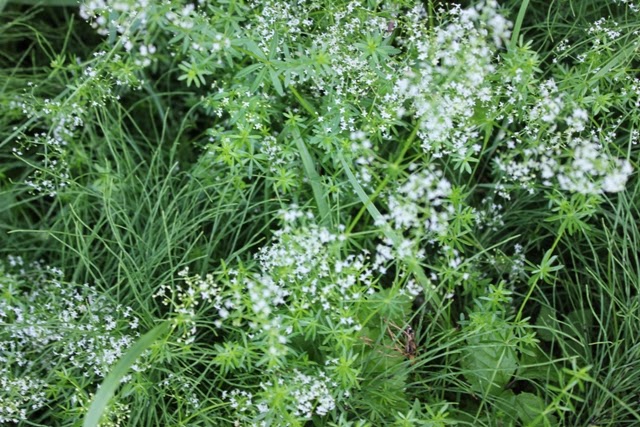 Today, I was really good, doing a sketch after both my breakfast and lunch! Here is the breakfast one done with colored pencils. I looked it up on line and I think this might be called sea lettuce. 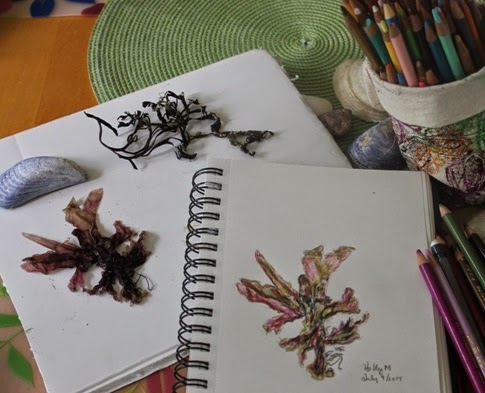 And this is the lunch time one. A small bit of sea weed root and a mussel shell. 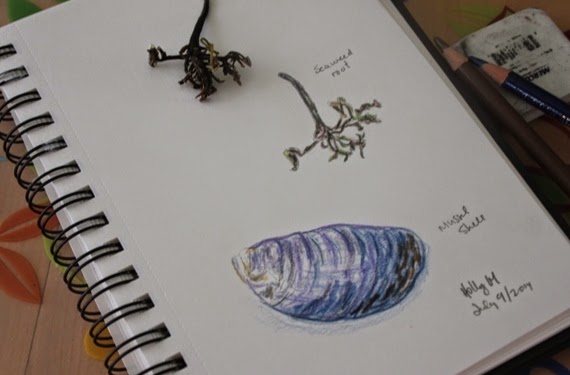 My goodness, I have so much to talk about! Better here than to my husband though. I make him sound like he wouldn't listen, lol. He does try but I can go on a bit at times. And then at other times he tunes me out. So, you get to listen (read).
This afternoon, I added the final curved borders to the seahorse and then a final border. I was quite happy to find something in my stash that I thought worked and I quickly added the final batik border. As an after thought iIwonder if maybe I should have also added it with a curved seam as well. 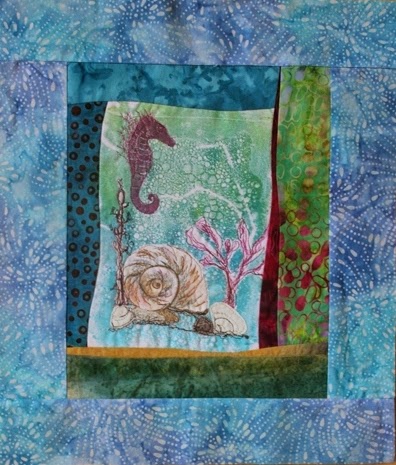 I'll think on it tonight.
Tomorrow, I will be going out to put in my hours at the shop downtown. I plan to bring my basket with my cosmos piece, some perle cottons, ribbons, and beads. Hopefully, I'll get it finished up and ready for the binding.

You are so good at these things

Beautiful work on a wonderful blog! And if you been on my blog, you know that I not only love nests and have them in at least four spots inside and many outside.

Tell your DH that my DH gave up on my rockks, twigs, nests..you name it...all over our house. And now he finds things and brings them home to me! :-)

I love seeing your sketchbook in the posts. : ) BEAUTIFUL xo

Love looking at your sketches.
Ally.