I decided on Tuesday night that if we got some nice fresh snow, I would try some snow dyeing.
As is often the case with me, I read about it sometime last winter I believe in Quilting Arts magazine and I had already prepared the supplies needed, but never gotten around to trying it.
The first thing I did was gather all my equipment which I had stored in an old dishpan. I mixed up a soda ash and water solution, about 4 tbsp to a half gallon of water and put a couple of pieces of white cotton papillon in it to soak for a half hour. Rubber gloves and a mask for mixing the soda ash and the powdered dyes are necessary. 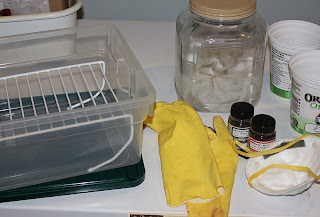 Using rubber gloves I wrung out the 2 pieces of fabric and laid them in 2 piles on the plastic rack in the Rubbermaid container. 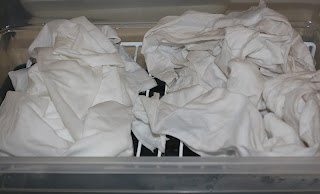 Then I went out on my deck and scooped up 2 yogurt containers of fresh snow. With a mask on, I mixed about a tablespoon of each color of Procion MX dye(midnight blue and magenta) into the snow which I then spread onto each pile of fabric. I only mixed the dye powder with the top half of the snow in each yogurt container, spread it onto the heaped fabric and then I simply spread the rest of the snow on top. The idea is to let the snow melt and thus carry the dye through the fabric. I didn't mind a little color overlap where they touched. I put the lid on and set it near a heater--not close enough to melt the container! 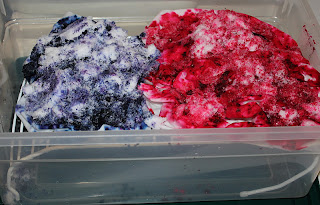 I wasn't sure how well the dye would take, as I heard they lose their strength as they age, and these were several years old. At noon today, though, I went downstairs and started rinsing the fabric. You need to wear rubber gloves during this process as well. I rinsed and rinsed until the water became clearer, and I got hungry, so I left it in the laundry sink to soak with some Synthropal for a while. Most directions say to throw it in the wash at this point but I'll have to hand wash since I have a new front load washer and it goes off balance without a full load. I figure, I'll just keep rinsing until clear and then I'll throw it in the drier. It's pretty well rinsed at this point though and the color is quite intense. 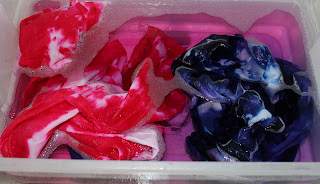 I will keep rinsing today and finally put it in the drier so you'll have to wait a day for the final result.
Posted by HollyM at 9:45 AM

So cool! I don't have snow where I live (unless you count a rather frosty freezer!) but I have heard this works with ice too so I think I will go buy a big bag of ice and give it a try! How fun!