It was a satisfying weekend. Yesterday, Gord and I did some errands and visited his parents for lunch. Then we came home and did some yard work, tying up trees and putting up Christmas lights. It was so nice to do when it was not freezing outside. Before I wrapped my Holly bush in burlap, I cut a few branches with berries. I think I will use them in an arrangement for the front step. 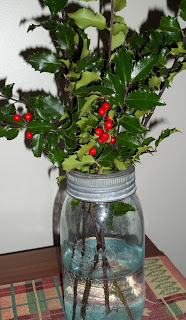 Today, we went out for breakfast, something we haven't done in a while. We shared a vegetarian omelet at the Nectar.  After that I put Chef Michael Smith's sweet potatoe vegetarian chili in the crock pot. My nephew is taking a chef's course and has met him a couple of times. We ate the chili for supper and it was delicious. As I often do, I added a few extra veggies--celery, mushrooms and zucchini. I also put both green and red pepper. 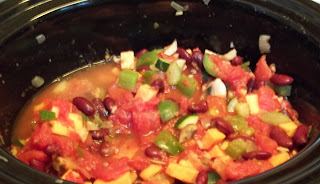 I did do some sewing today, my day wouldn't be complete without it, but I haven't yet taken a picture of one thing and the other I can't show as it is a gift.
Also, this afternoon I attended a lovely 90th birthday party for a lady friend. She often comes to our Friday lunch with her daughter. She was a war bride and was quite excited to introduce me to several other of her war bride friends who were attending and told me where each one had come from. She sure is perky for 90!
Posted by HollyM at 4:47 PM