This is one of those rare weeks, especially in summer, when I have no visits and no appointments. I'm spending it as creatively as I can. Before i tell you about what I'm working on, I want to show you what hubby and i did on Sunday. I've been reading a book about New Brunswick waterfalls. It has long been on my bucket list to swim under a waterfall. I discovered one near Miramichi called Little Sheephouse Falls anout an hour and a half from here. The weather Sinday was perfect and we set off with a lunch and swimsuit, bug stuff, etc, in a backpack. 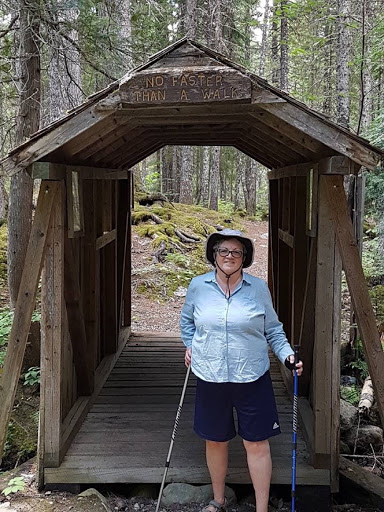 It was a short hike but then we discovered to actually get down to the falls, there was a steep trail into the ravine. I made it with the help of my poles and a rope which had been tied to the trees along the descent. What a pretty spot! It was so worth it. 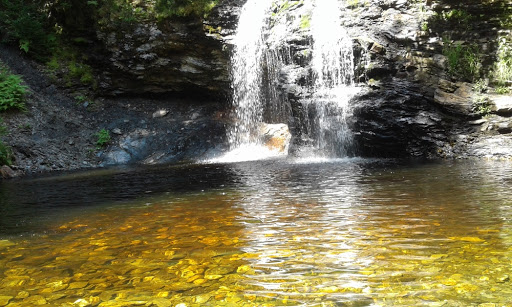 The dark area near the falls becomes deep, over my head in a small spot.  I ventured into the very refreshing water (that's a nice way of saying cold). After going in and out in between eating our wraps and sitting in the sun, we quickly got used to it. 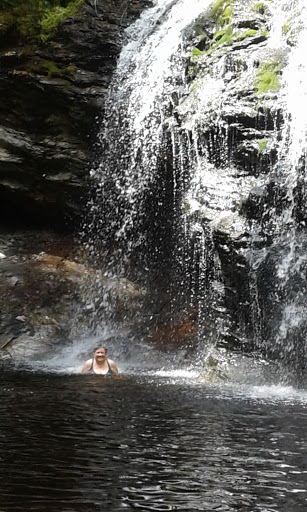 I can't even express how exciting and exillerating this was for me, especially after spending the last few years physically limited. Thanks to my new hip and a couple of joint repairs, the world has opened up to me again. I am thankful. I also heard about a zipline opening in Miramichi, reported to be the longest in NB and we were driving right by it. Yes, im terrified of heights, but I thought i could do it. I've been adopting the philosophy that i must not miss opportunities when they arise. 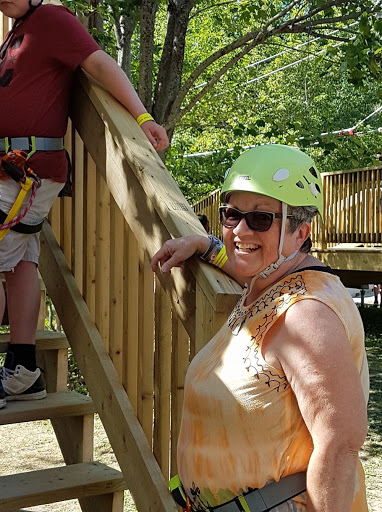 I can say i did it! Wish i had a photo to prove it! G took a movie too big for me to upload here. The platform is set above a cove of water. You zip over, climb another hill to another platform and zip back over the water. French Fort Cove. We stopped at Boston Pizza for supper. The first thing i ordered was a cup of tea. I think it took an hour for my heart to slow to normal!  It was the best day! Now, to my latest fibre workings. Finally i finished a few dragonflies, terribly fine work, although absorbing and metitative at the same time. 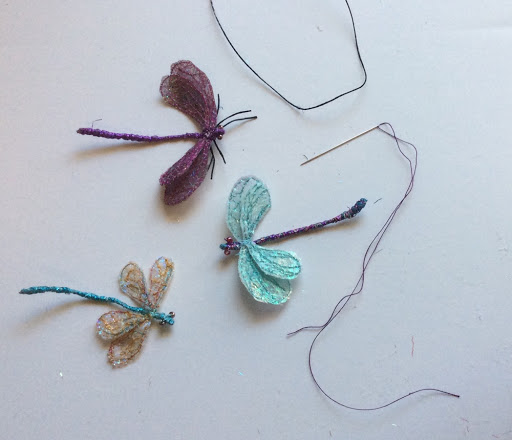 I'm even adding legs made from stiffened perle cotton. I'm pretty happy with these although I'm already thinking about how to make the wings thinner, lol. For now, I left the 'cows' on the design wall. In order to proceed  i need more mixed media to go with it. This is what i mean. I decided to use a summer theme on a smaller piece for practise, starting with canvas, some washes and free motion stitching in black based on a page from my sketchbook. 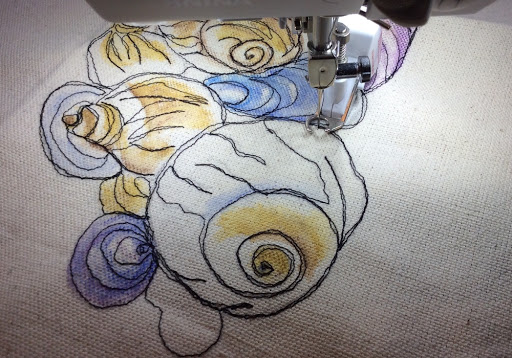 Yesterday, i applied some lazer prints to organza using gel medium and after drying last night, soaked them and gently rubbed the paper off leaving the color on the irganza.  I cut two pieces out and laid them in the background. This is a method described in a video by Jeannie Palmer Moore. She also has an article in the latest Quilting Arts. 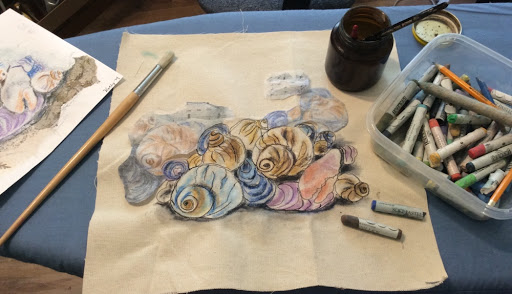 Next, i added more color using chalk pastels which work like a watercolor wash when brushed over with fabric medium. 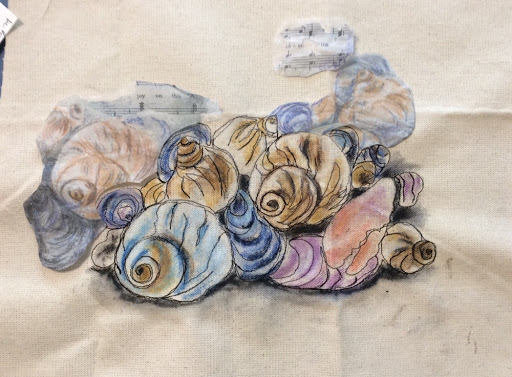 Around lunch time, while i was eating, i took the time to boil some new potatoes, and blanch some fresh yellow beans and peas from my garden. I assembled a salad, inspired by a Pinterest picture of a niscoise salad. Dressing was mixed in a jar using, rice wine vinegar, fresh oregano, herbs, a little greek yogourt, some avocado dressing and some olive oil. 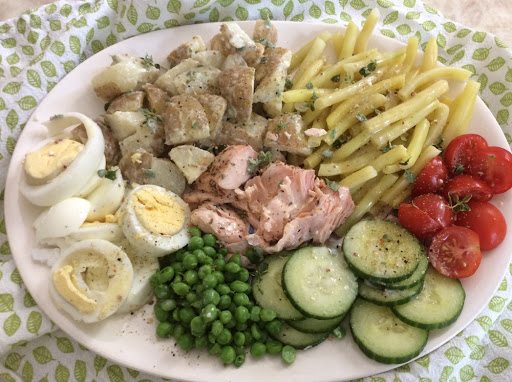 I'm getting hungry thinking about it! After that I searched up some info about seashells along with some sheet music of a little song and printed them out. More transfer onto organza to be made with thise later. 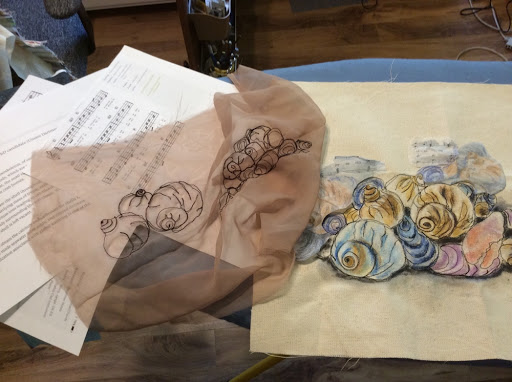 The shear beige organza which came from my stash (found as a blouse at Frenchies), I free motion stitched, again with black. 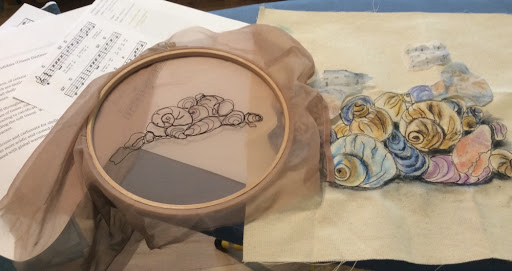 These can be cut out and collaged to the background. 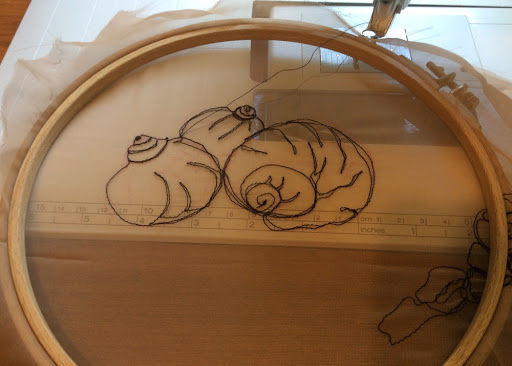 It's pretty warm out; I ventured out earlier to water and pick veggies. I spend my time in a cooler interior when it's like this unless it's the weekend and we go to the beach. Tonight, we may walk at the waterfront. I hope you're having a nice week so far and have some creative time planned.
Posted by HollyM at 12:34 PM

You are more adventuresome than I. I, too, am just now coming back after joint replacement X2. Three years of no energy, and no creativity. What a great feeling to come back. To be producing again. Congratulations on making it back so well physically, and well as creatively. The variety of your work amazes me.
Pat F in Winnipeg

What fun! The water looks wonderful. I love the dragonflies and shells!

Hi. It is bj18wise. I received your Instagram request for a swap. Here is my email address bj18wise@comcast.net. Takes me forever to figure out bells and whistles of reply on Instagram. and can I add my congrats for your courageous adventure after surgery. Well done.

Wow!!! What a gorgeous place. I'm happy to see you up and chasing adventures. As always, love your projects.