I can hardly believe that I haven’t posted here for more than a month. I’ve been in a fog as I’ve run to appointments, tripling to figure out what’s going on. Actually, Hubble has been driving me to most. I’ve had hives for nearly 6 months, and other weird pains. They were appearing like this most days as the day progressed. Finally, I was prescribed high dose antihistamines to get it mostly under control. Yesterday, I saw the dermatologist; she gave more antihistamine direction And wants to do a biopsy as apparently there can be other causes of hives. Now, I have to stop the antihistamines on a day they she’ll be in office in the afternoon so that I’ll have some appearing. 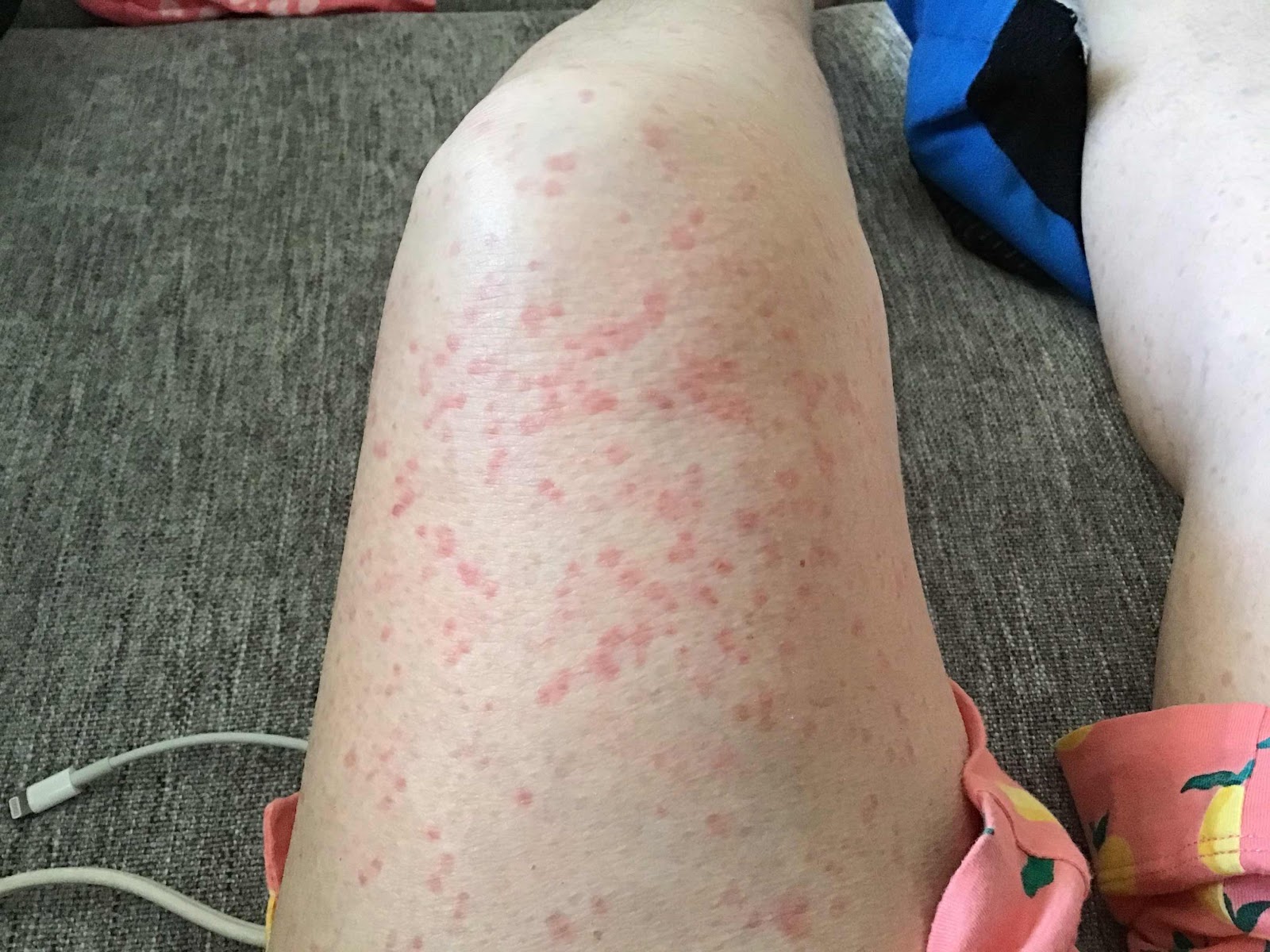 I suffered for a while with this, often to tears, but we’ve got it mostly under control now so that I’m comfortable.
Then, lol, this week after urine tests and a ct scan we discover a kidney stone that explains some of the other stuff. I now have pain meds and meds that are supposed to help break up the stone. It’s wait and see.
In the midst of this the Maritime provinces have opened up to each other only we couldn’t go because I wasn’t up to it. So, my daughter drove the 4 hours here with her 2 little boys so we could meet our new grandson Gussie. My husband actually drove partway to meet them. He brought Ollie the 3 year in his car. 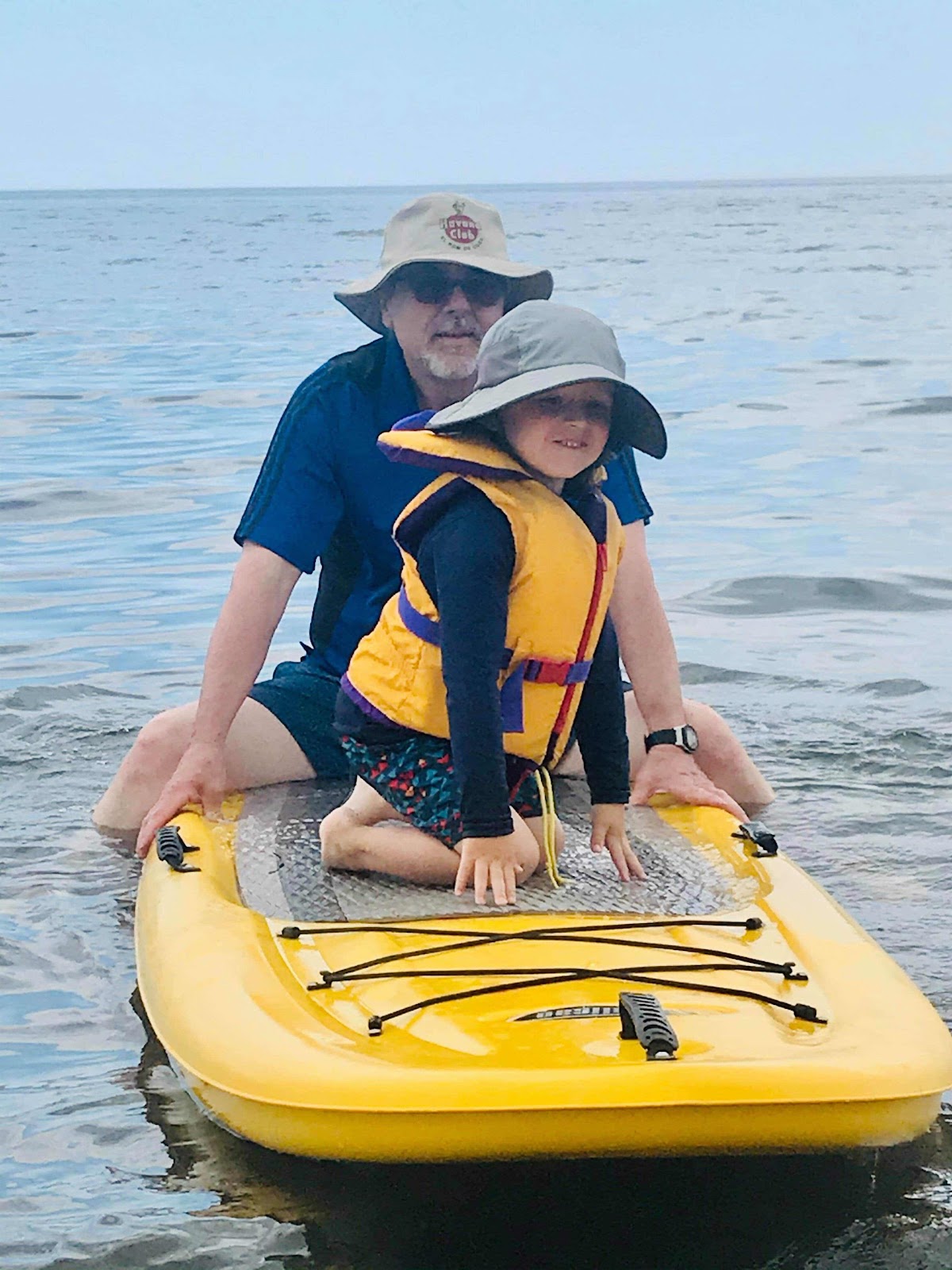 We had some great weather, although a little warm. We got some time at the beach and even the great grandparents ventured to the water. Ollie was filling his bucket with jellyfish. Ugh. 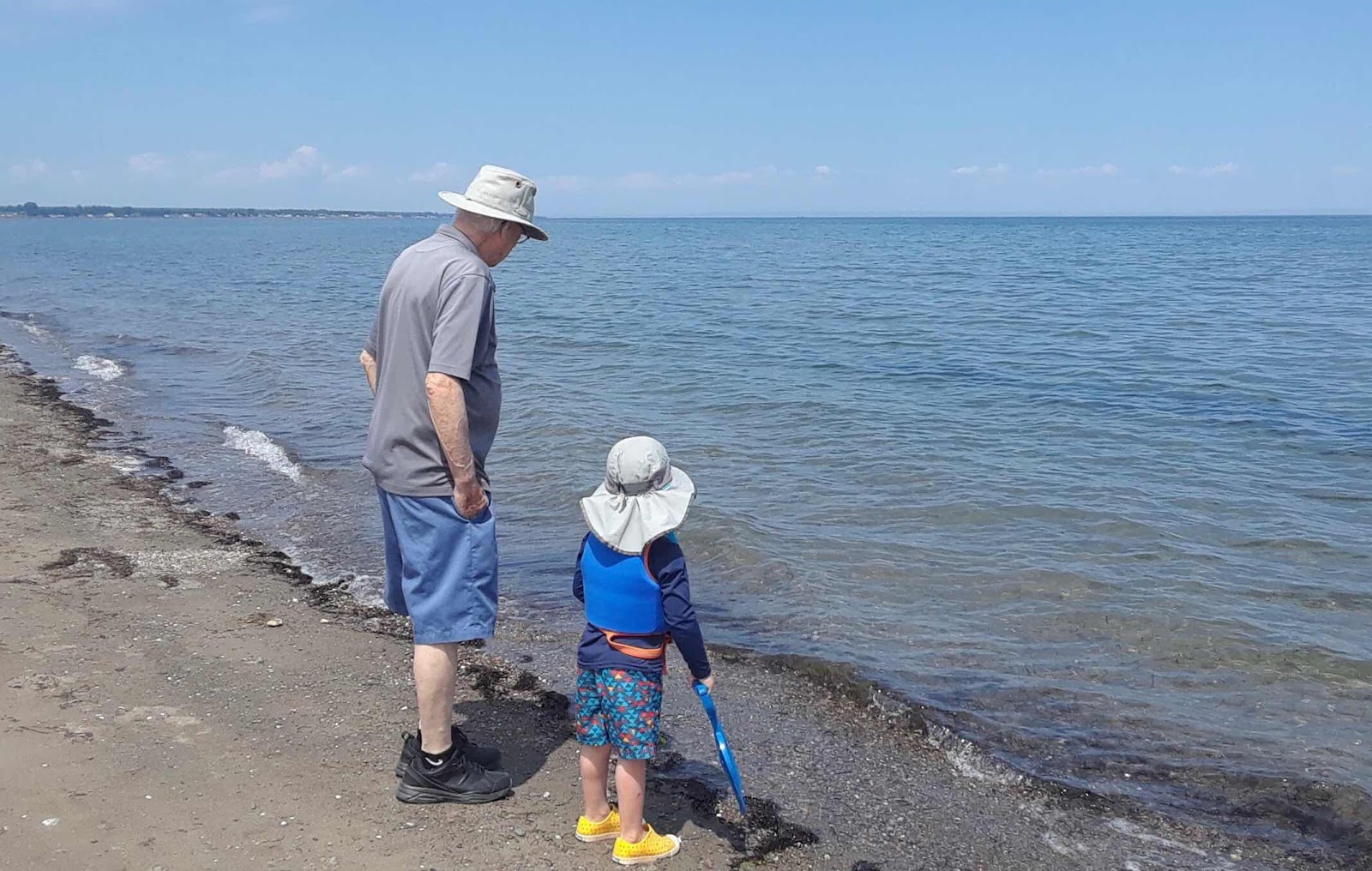 I had lots of snuggle time with 4 month old  Gus. 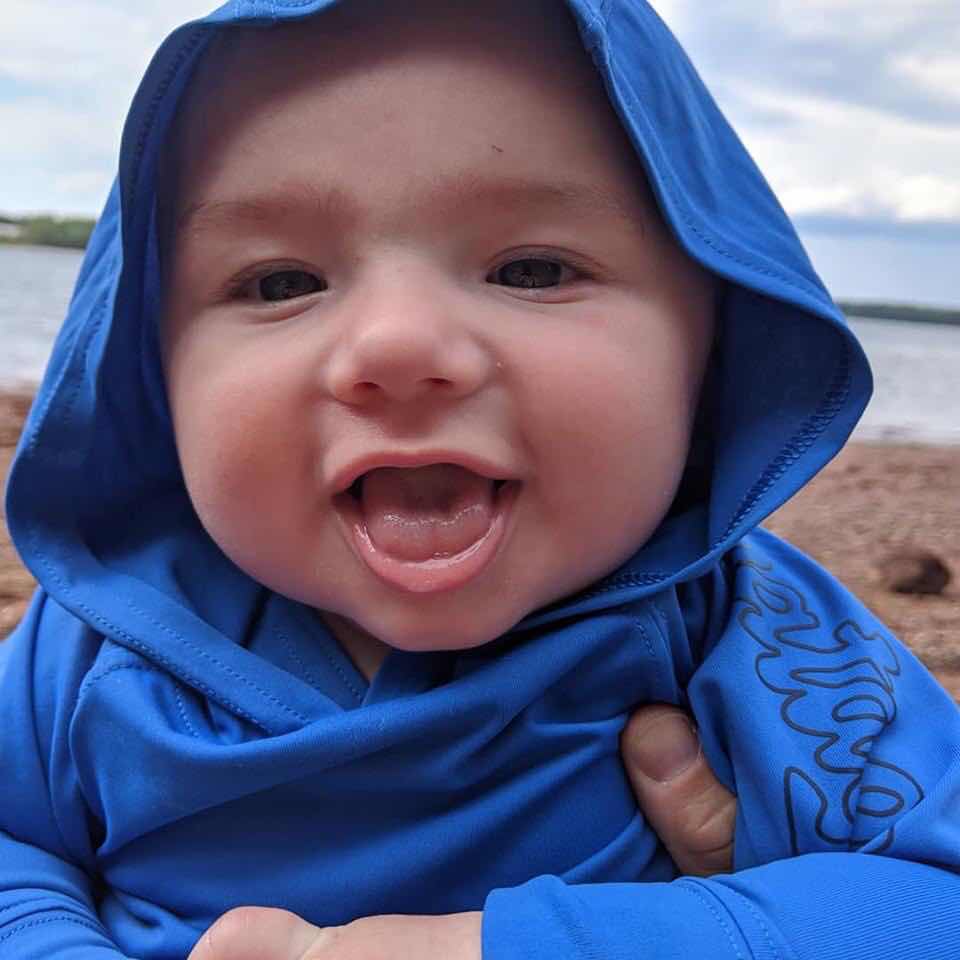 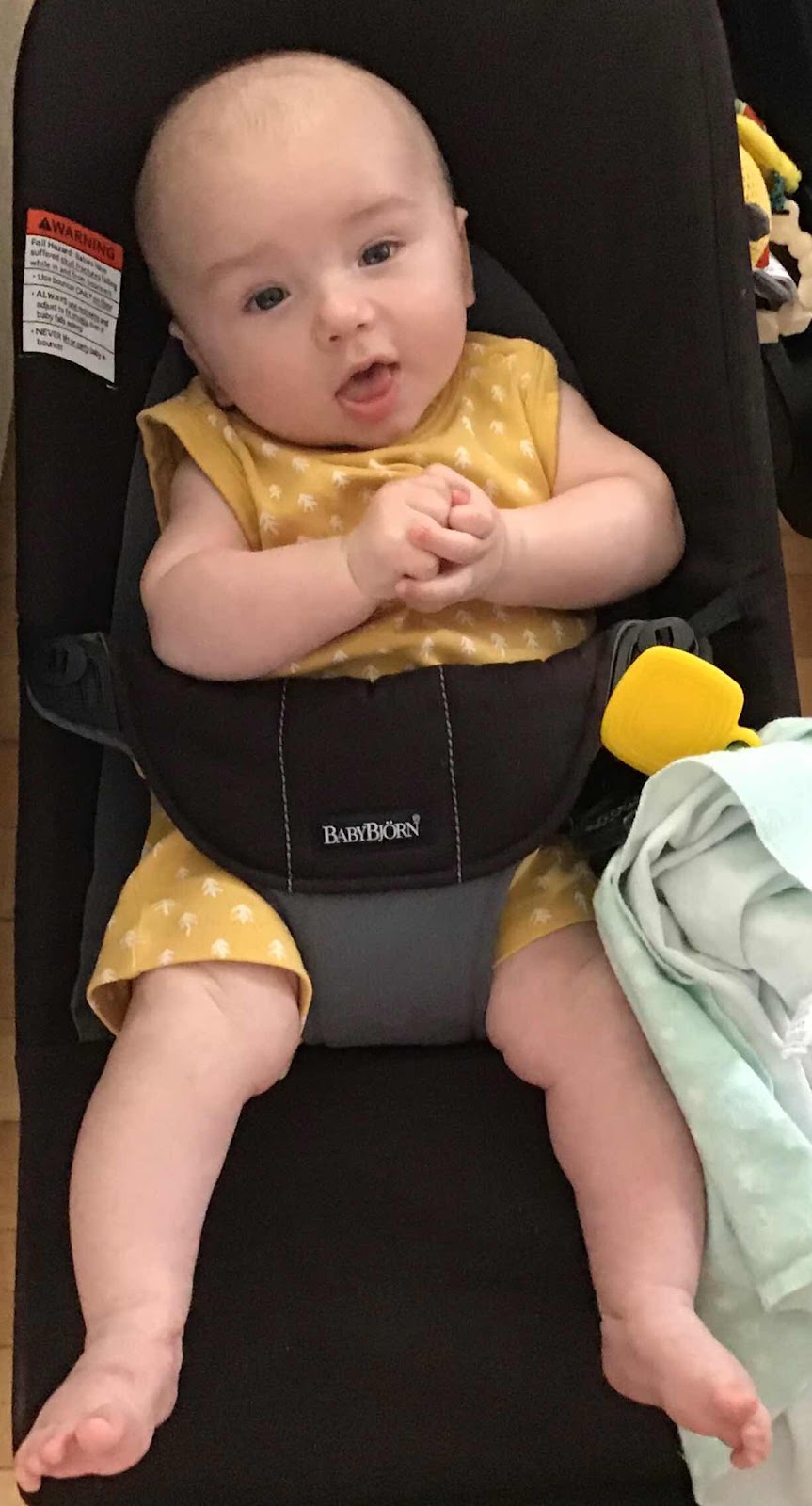 Ollie sure loved this swing in the apple tree! He would wind it up before hoping on and spinning like crazy. He got grandpa to do it once too and he won’t do that again! 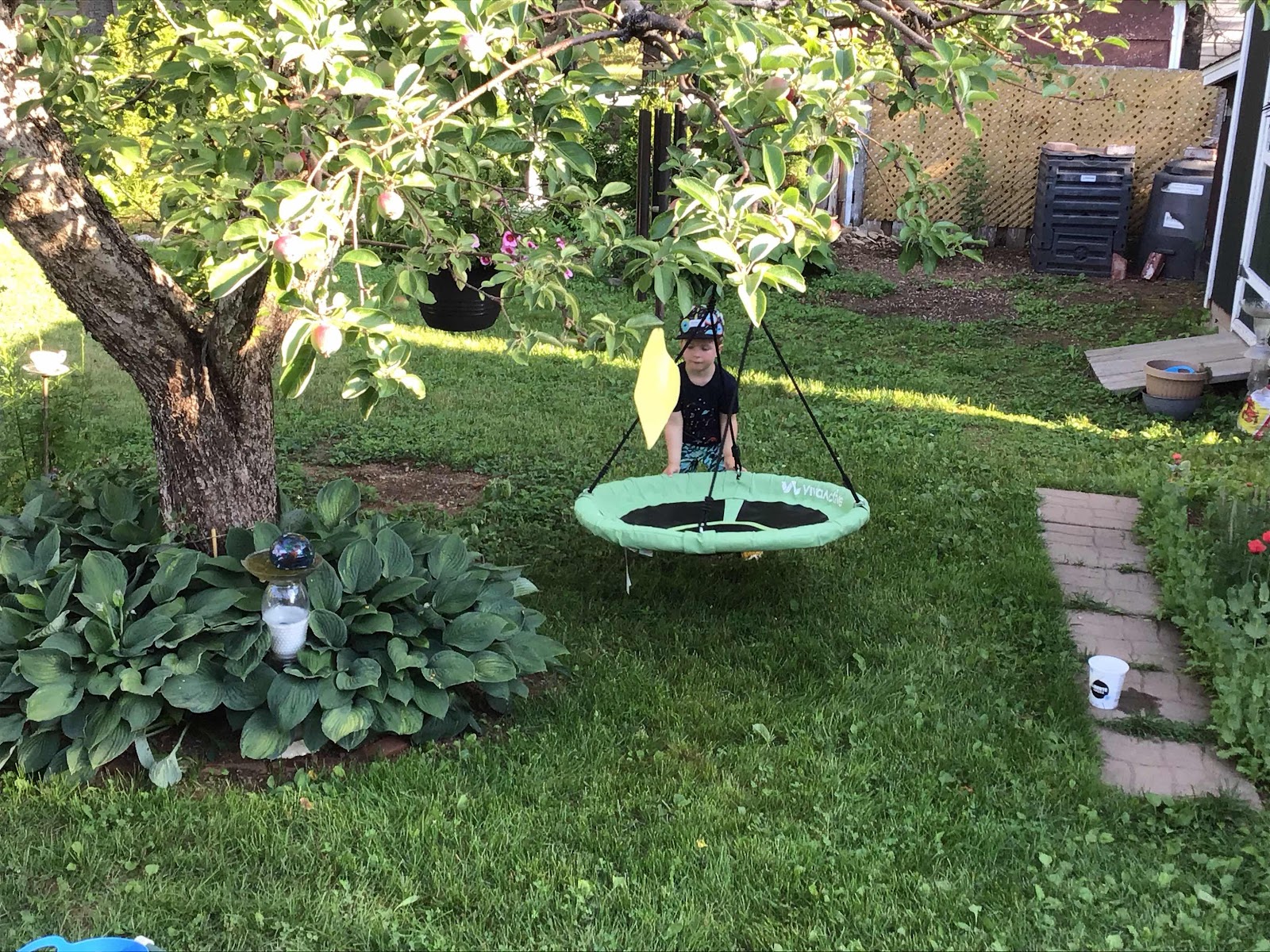 It really lifted my spirits to see them. Now I have to get well enough to head to PEI for a visit.
My friend, Sue, and I were lucky to have a good day for a little road trip last week to a fairly new lavender farm near Bouctouche , NB. It was nearing its end for the year and closing this week. The gift shop was sold out the next day. I bought a nisegay if dried lavender and a jar of Lavender honey. Yum. 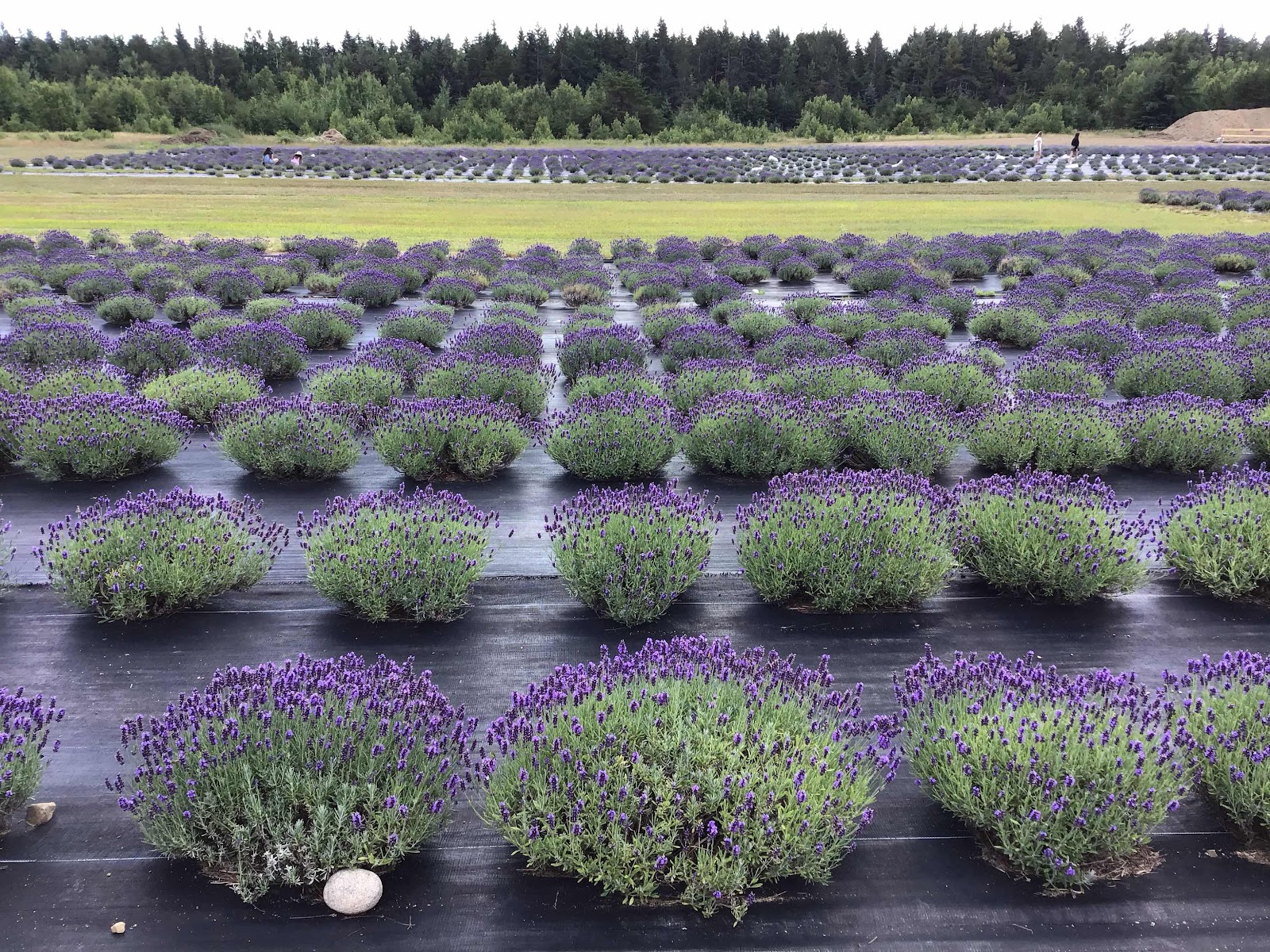 That was the first thing I’ve done all summer and I was lucky to have a good day to do it.
It’s been very warm and muggy. I’ve been spending a lot of time in my studio sewing quilt blocks. Fiber art is still beyond me right now. I finished all of the flying geese and I’ve started to sew them together in pairs. 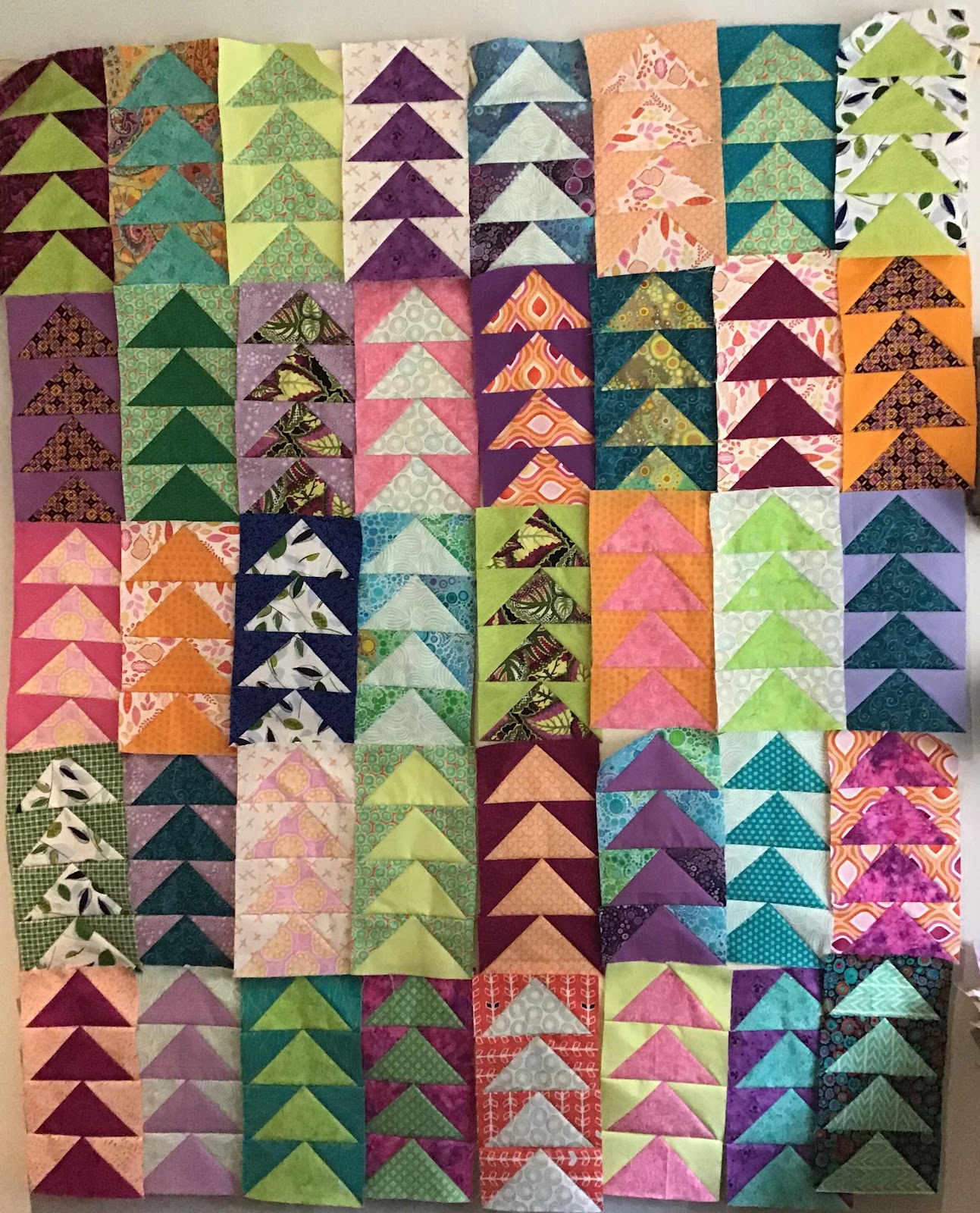 I also made 25 village house blocks for a baby quilt. 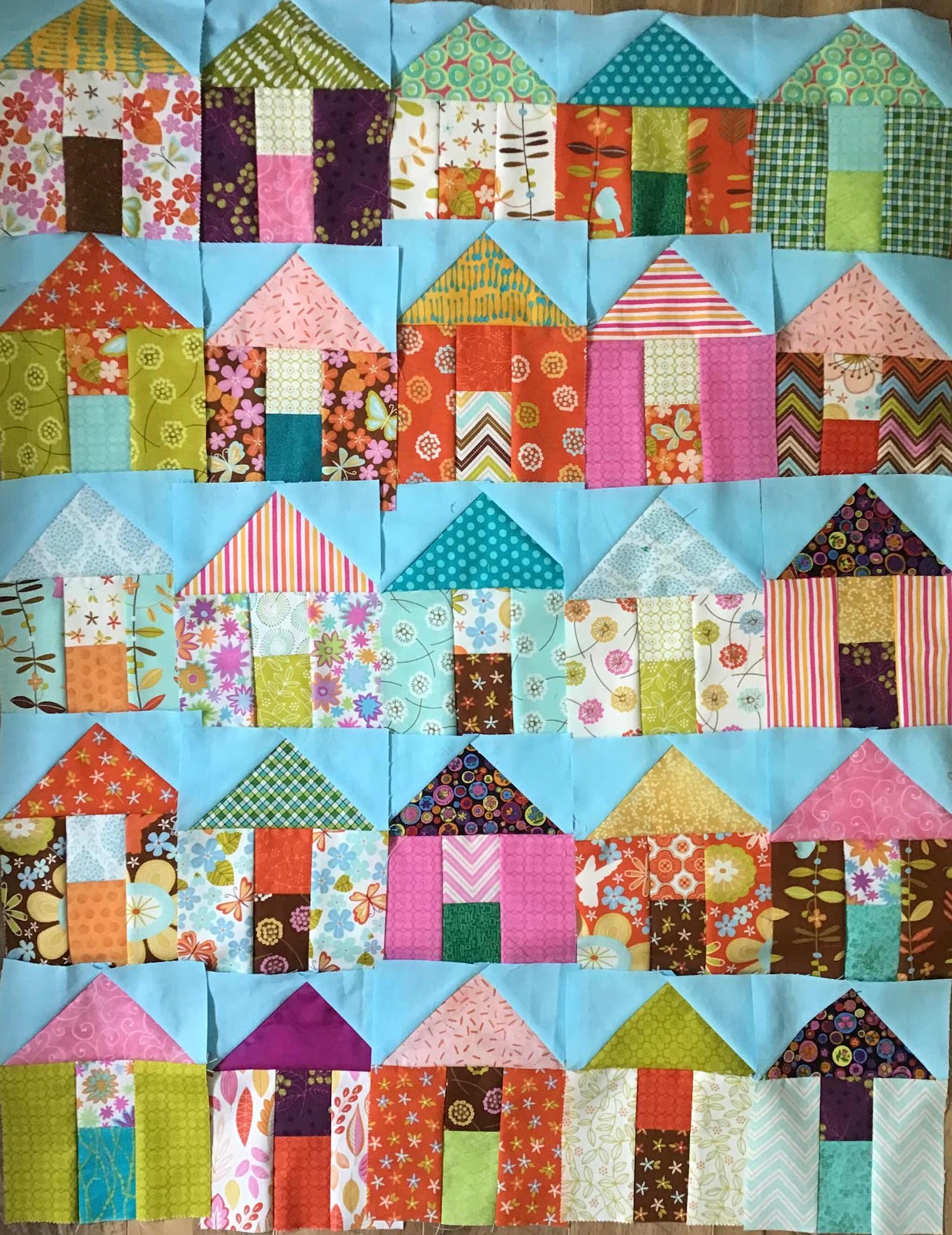 Today, I made some tree blocks which I have to figure out how I’ll fit them in. 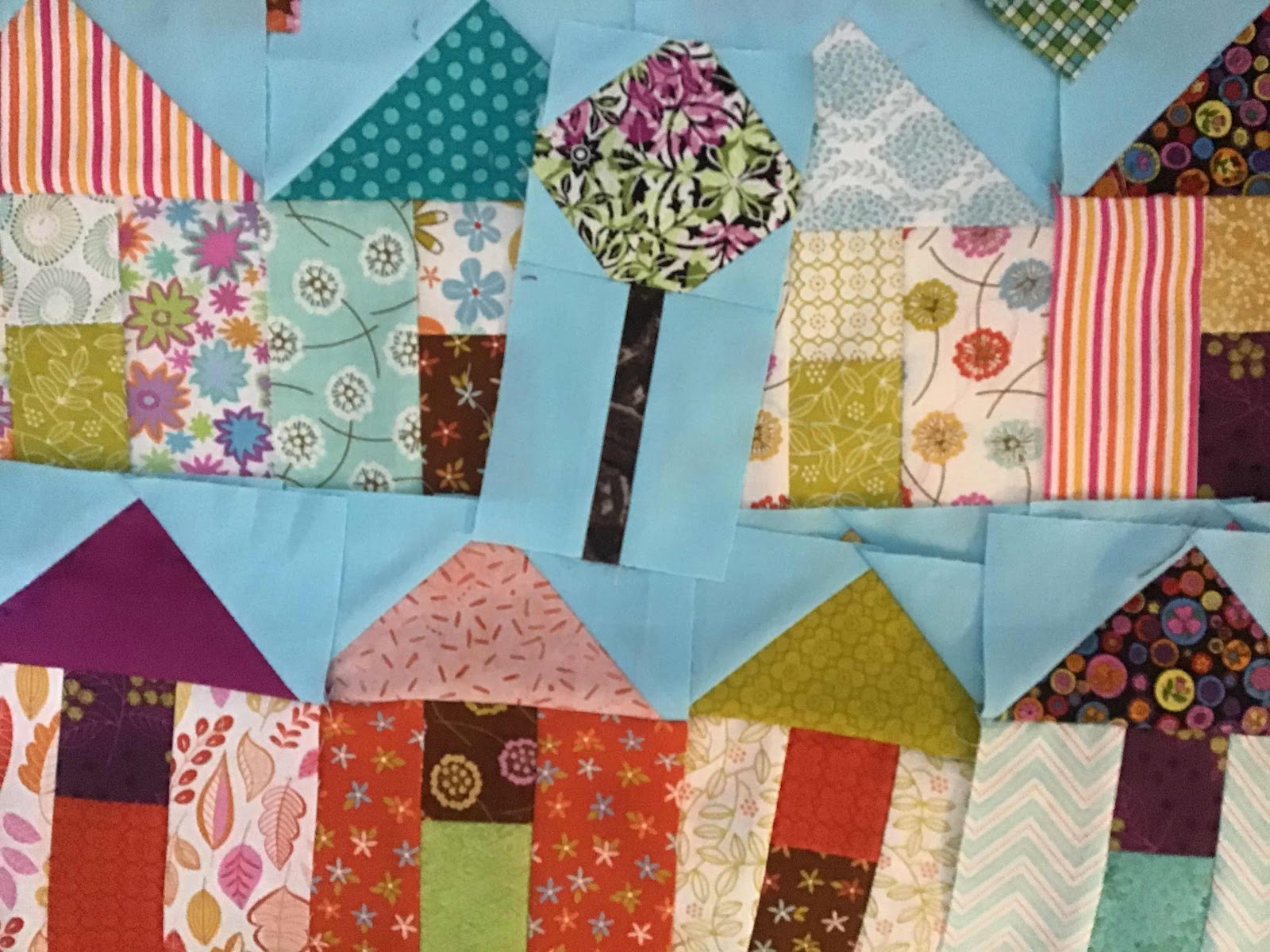 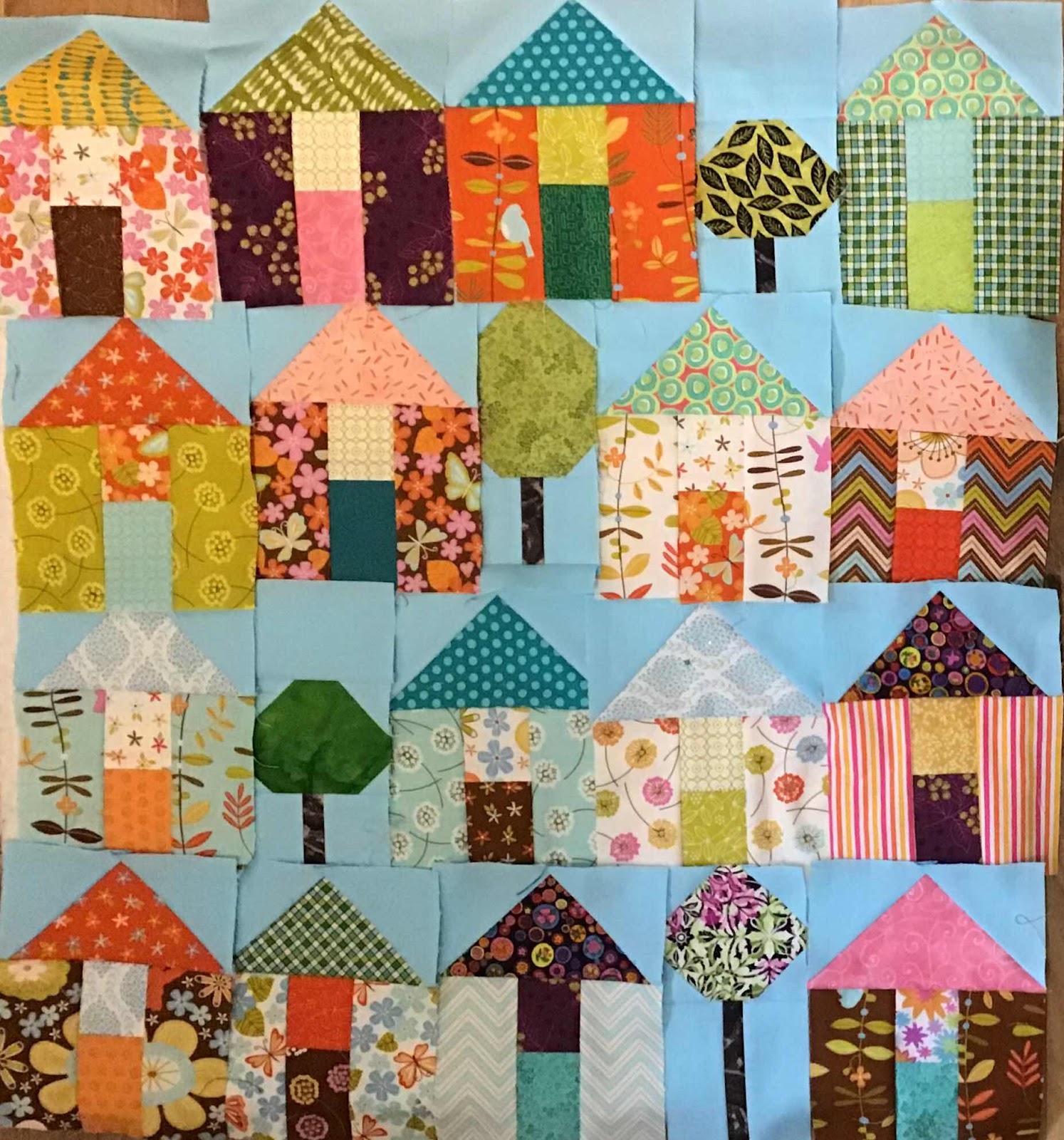 Since the heat settled here and after the last rain, the garden has flourished. I’ve been picking rhubarb, snow peas, carrots, yellow zucchini and even my first potatoes. Beans, lettuce, peas, cucumbers and squash are nearing ready. 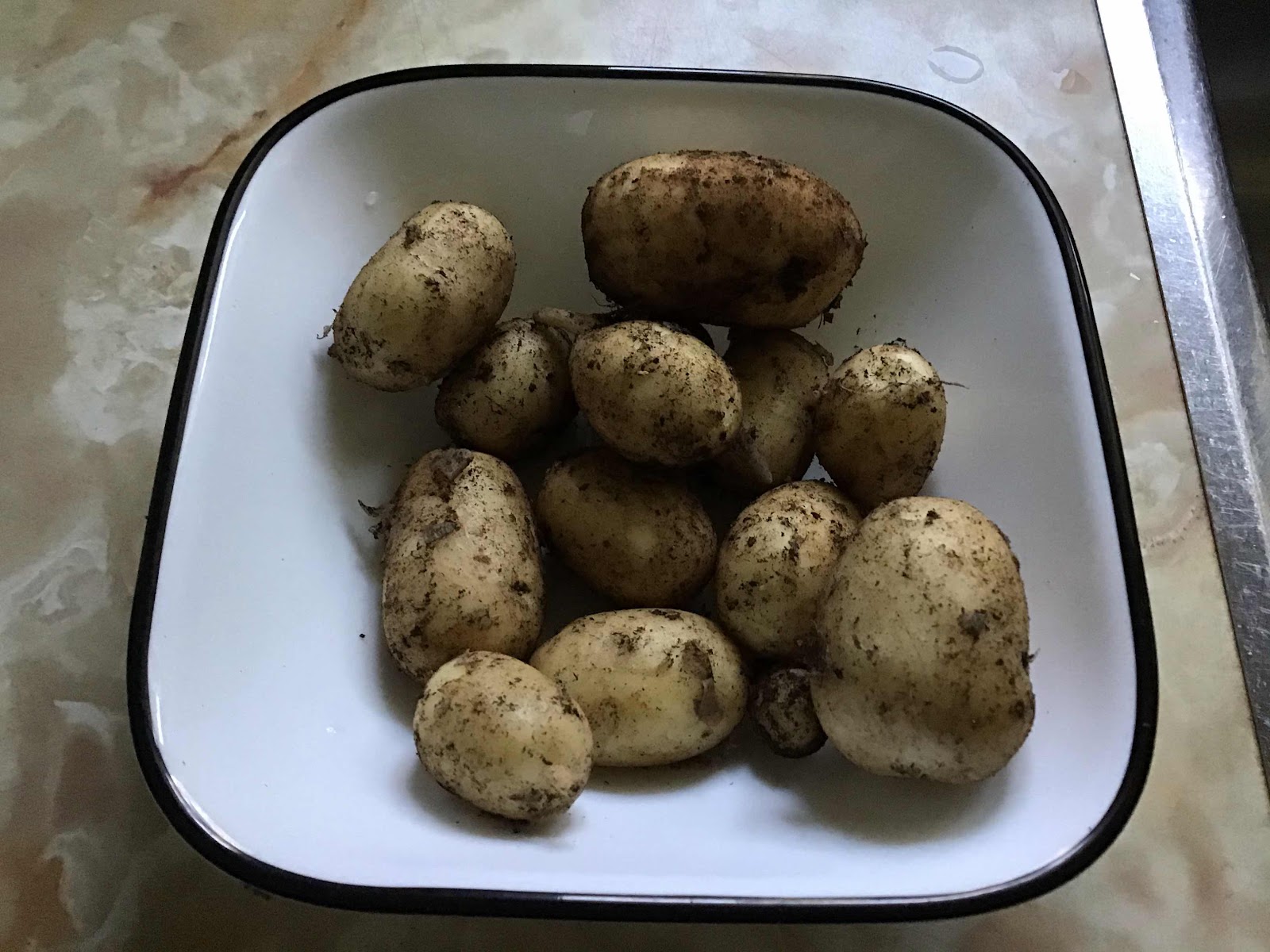 I invested in a fabric order from Christa Quilts reasoning that I’ll stock up for another long winter and maybe another quarantine. I’be also ordered yarn. 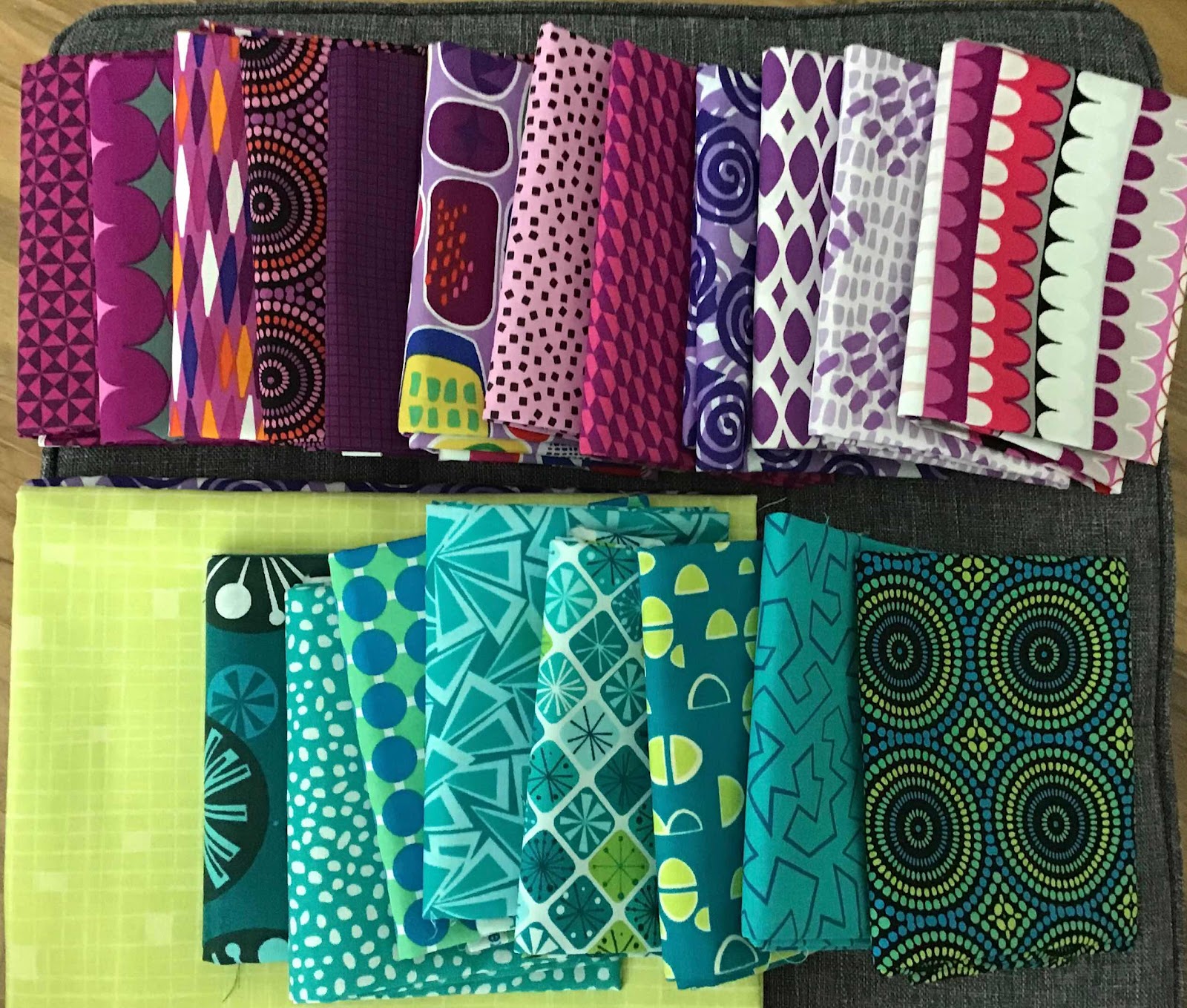 Both my husband and I are at risk for the virus so we limit our shopping and outings. We order take out but don’t eat in. We must be prepared for another shut down in the event Of a second wave so we’d like to get to the island again in case that would happen.
Finally, my husband is easing into retirement and we have to keep to ourselves, lol. We are lucky in a lot of ways. We have a small home and yard, we’ve seen and held our grandsons, we’re doing ok. I’m ok to do a lot of cocooning for now. Thank goodness for our hobbies. My husband also golfs.
I’m hoping you my readers are doing ok too.
Posted by HollyM at 3:00 PM No comments: