Today was the first storm day of the school year. I was hoping for it because I've been feeling a little sub par with a sore throat and a bit of a cough. I was up early due to said cough, so I had my breakfast and mixed up a bread dough. It was a recipe I pulled off the net with barley, rye and spelt flours. It was OK, but a little dry --could be something to do with the fact that it called for lecithin and I didn't have any. It wasn't beautiful, so no pictures.
I did try to take some pictures of the birds outside my kitchen window, and those didn't turn out either. I think I should have been using the macro setting. I'm putting one below so you can at least see the snow we had. 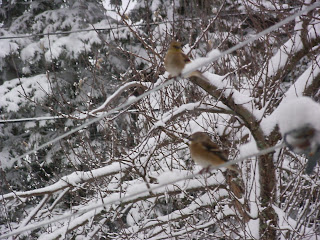 I usually do as much as I can get in when I have an unexpected free day; however, today I spent some time on the sofa with my knitting and crocheting. I don't know what people find to watch in the daytime!
I did get one more crocheted trim done from the book Crochet Adorned by Linda Permann. (not sewn on yet) 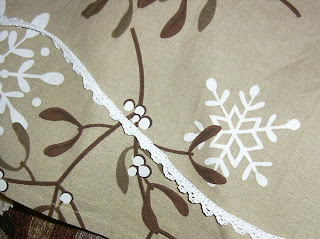 Love the bird picture...I had a wood pecker in my back yard on Sat. as well. I envy you being able to have your feeder at the kitchen window...if I did that we would be tracking bird seed and various other unmentionables directly up the back steps and into the house. Sometimes I think it would be worth it, but after a day or two of cleaning up the mess, I just may change my mind.
About your knitting and crocheting...how about posting a pic of your knitting project...I am assuming it is your afghan. I would love a visual...thanks for the pattern.