It's been a rather quiet weekend with a guild sewing day yesterday, breakfast and the paper with hubby this morning, visiting in laws after lunch today, and a bit of sketching this afternoon.

I'm still working on my sofa cushions. I've got one together but ran out of Velcro for the second one. My mother in law gave me some today, so I'll be able to finish them. I've got several doctor's appointments this week, including one for some dental work. I'm hoping for some time in between.

You'd think January would be a quieter month but I put off some things from before Christmas. Also, our retreat is coming up in early February. Between the secret sisters thing and some birthdays, I've had to do some sewing for 'gifty' things.

I joined this group for sock knitting on Facebook and that has got me madly knitting as well. I'm making a pair of socks from a vintage pattern with a single cable up each side. I know that a solid color is usually recommended for cable work, but I was so in love with this color and hoped that the fairly monochromatic colors would show the cable. I think it does. 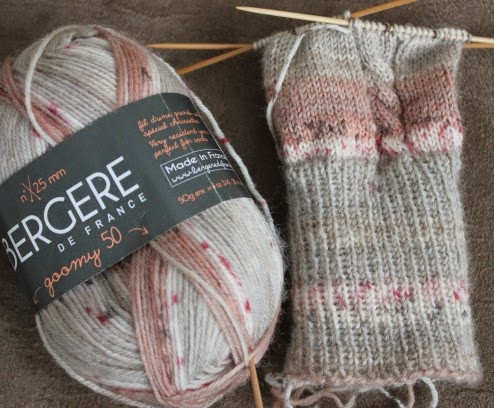 I feel a bit as though I've not been doing a good job at staying focused this month with so many things to do. I realized that I haven't been doing the sketching that I did in the summer and fall. It is meditative and helps me to slow down and relax, so I thought it was just the thing with a cup of almond milk hot cocoa this afternoon.
It is the time of year for the fish shanties. I love to photograph and sketch them. What is it about those temporary little villages that spring up out on the ice that so fascinate me? Each year, the colors and configurations are different. They are fun to try to capture and I love it when I get a few of the fishermen. Here they were having a bit of a chat.
I grabbed my sketch book and my colored pencils for a bit of a quick study based on one of the photos I took last weekend. 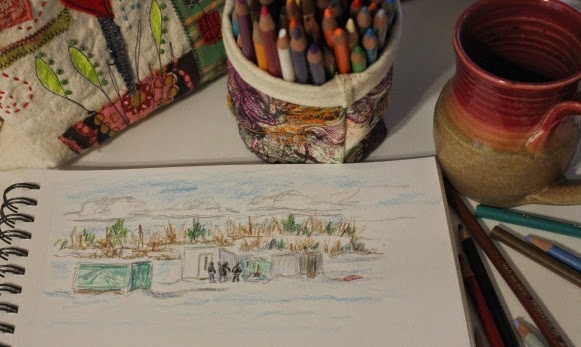 I will do a few of these I think when I feel the need.  Last year, I did two pieces in fiber. 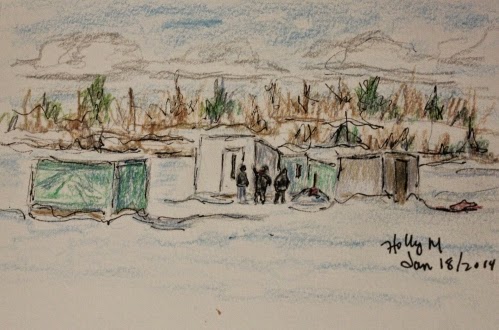 Well, I must stop and go get my supper going. I hope you've had a nice weekend.

Your sketch is so wonderful Holly. Have a wonderful week,
Meredith

How fascinating to see the little huts on the ice. And what an interesting subject to sketch. I like your knitted socks with the cable. I knit the same pattern each time, very plain but fits so well.
It is certainly winter with you, a very different life to England! Glad you can get out and be in the fresh air, the trees look lovely in the snow and on your textile work.
Lovely to see all your creative projects.