Last night ,I took my bicycle for a little spin on the nearby trail, taking my camera and some bug stuff along just in case. Of course, I had to stop and take some pictures, and when I was quickly swarmed by mosquitoes I whipped the fly dope out and applied it. 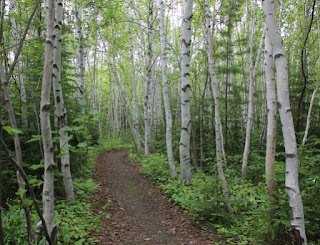 It never fails, every time I go, there is something new to see. I've been searching for these in my reference book but haven't found them yet. 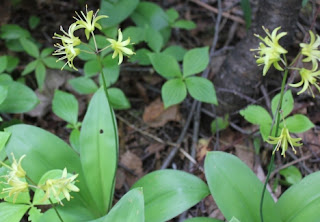 They are so delicate.

If the wildflowers are  plentiful, I like to pick a few for my bouquets. 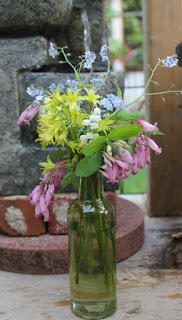 I found some forget-me-not  too. 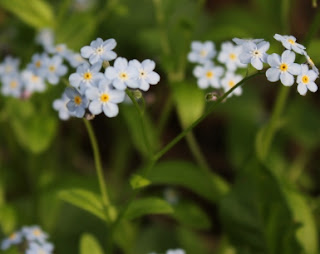 In the last few days, we've had a mother and baby robin in the yard. At this stage it is out of the nest but can't fly very far, and so it relies on it's camouflage to hide amongst the shrubbery.

It managed to get itself perched upon the edge of the wheelbarrow where it stayed for some time watching the mother collect grub.Balancing was a bit precarious. 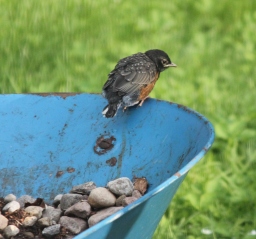 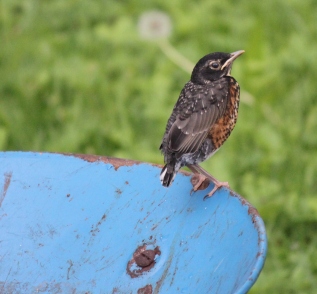 This morning, my friend, Sue and I took a little trip out to a small fabric shop where I found a piece of some white tone-on-tone that I want for a new quilt project. I even found some nice percale which I like for fabric painting and printing. It is a tighter weave fabric that holds lots of stitching without stretching or distorting too much.

I intended to head out to the garden after lunch as it is a breezy, sunny day--just right to keep the bugs away. First, I headed into my sewing room though to make some final adjustments to my fusible backed tulips. Ha, an hour and a half later, I was still there, although I finally said enough, and ironed it all down. Final decision.

It's ready for the thread painting part of it now. The fun part! The wings will not be stitched fully down, just attached at the thorax so they will float above the piece. 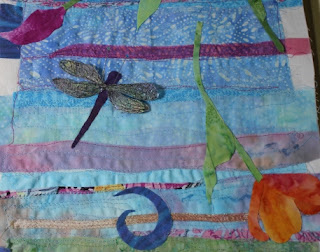 For supper, I've a small lobster in the fridge. I made up a rustic potato salad and that will be my supper-- simple, but oh so yummy. Oh, I also steeped  a green  tea at the same time to which I added fresh lemon and some honey.
So, I think, right now I'm heading outside for a bit to plant  a couple of new additions to the back border garden.

I hope you're enjoying a pleasant weekend.

Nice work, Holly! The flower is Clintonia. It grows around here too but I have not seen it for a long time.