This morning after the big storm yesterday, all the birds flocked  to the feeders. I didn't catch the chickadees who flit about so quickly, but I watched the nuthatch on the suet and the flock of goldfinch on the feeder and in the apple tree. It is all endlessly fascinating to me, akin, I think, to being mesmerized by fish in an aquarium. 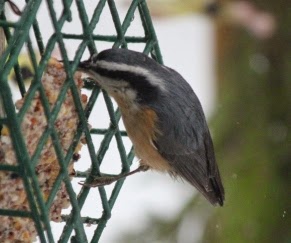 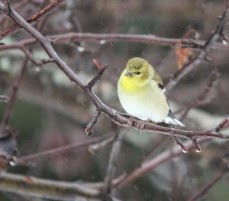 I went out this morning to shovel a bit more off the front step and walkway. Even though it had turned to rain, there was still lots of snow. I had to rest afterwords.

After my lunch, I stayed at the table and put most of the finishing touches on the small watercolor I'm doing as a gift. It makes me a bit stressed as I don't do them usually outside my sketchbook. I'm very critical of all the little details. Even looking at it now, I think I need to touch up the color in the water. 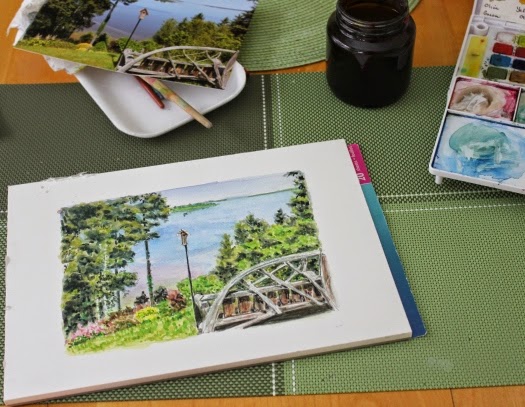 I want to take it tomorrow to have a mat cut for it.

I thought that I might paint a couple of sky fabrics today; however, I didn't have the energy, so I went into  my studio, where I cut out a few more rocks and a fabric that I may use as the background under the rocks. Most of the fqbric will be covered or cut as I add more pieces, iron them down, and cut around the shapes at the top. 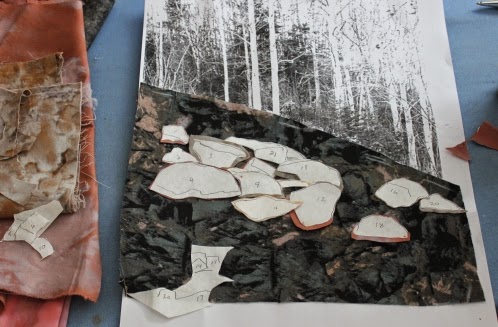 I wanted to use a dark fabric so that I won't have to cover every little space. It will all be integrated with thread painting later, or that is the plan.

I'm saving all the tiny fused scraps to add later if need be. 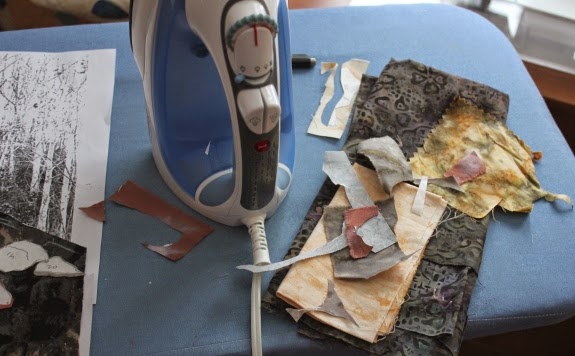 To me your watercolour painting looks perfect as is. The detail is in the front of the painting with the water fading into the background. Someone is lucky to be receiving this painting.

Holly, I was just looking through my photos from my Maritime trip in the fall and have selected some clothesline photos and fox photos for painting tomorrow. There was one clothesline I didn't get a photo of as it was a busy highway but the line was filled with an array of coloured women's short sleeve shirts. I wonder if I could paint if from memory???