Trip Around the World blocks

I thought I would be really bored recouperating from this surgery but not so! Grant it there are lots of things I can't do; there's nothing wrong with my legs or my left arm though and I've been finding lots to do as I feel better from the surgery. I've been needing to do some sorting in my storage areas. Who doesn't! Obviously not heavy stuff. I can, however, pull out smaller items to add to a giveaway box. It's getting full!I don't go at it all at once, just when I need to get up and move about.  I finished the book, The Improbability of Love; it's excellent! I also realized while sorting a few things in the studio that even though I can't do free motion work, I could likely do some regular piecing as one feeds with the left hand. I happened to have a box with some Trip Around the World blocks done, and all the rest of the strips are cut. I can strip piece easily. 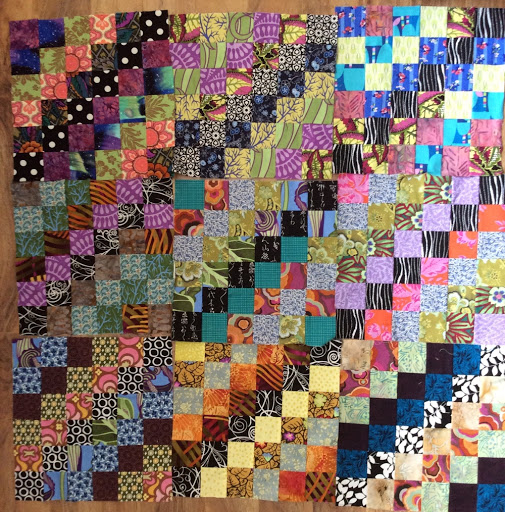 Good thing I laid it out. I discovered a mixed up block. Can you spot it? I'll fix it later. ( since I posted, I found another block, lol. No wonder I'm into fiber art!) I plan to do 20 blocks for a 4 by 5 arrangement with borders. As I've gotten more and more into art Quilting and traditional Quilting, In recent years I've  really let myself get caught up in new things, thus resulting in too many UFO's. I must look at this time as an opportunity to organize and get some things done or to give them away. It's going to feel good.
Posted by HollyM at 10:08 AM

So colorful! I can't see anything backwards. lol

I'm glad you can work on something. Organizing is good!

First things first - have I missed this photo of yourself in previous posts?? I love the short haircut and the colour - wow!! Wish I was as adventurous. On now to the Trip Around The World, congratulations on sewing these pieces up with only one fully working arm, I think your fabrics are super, I can spot some KF fabrics in there too.

Trip quilt is looking great, Holly! I'm VERY glad the surgery is finished. My SIL has just had shoulder surgery- left arm, right to follow!!! It is NO fun at all, I know but be a good girl and youll soon be as good as new! Take care .

Why am I not surprised that you've found a way to keep on stitching. Love your tenacity.