Thinking of new projects, or finishing old ones

It is that time of year, isn't it, when we've packed away the Christmas things, we've cleaned a bit maybe sorted some things for the second hand store, and we turn to finishing some projects that have been languishing for a while.

This one I started about a year ago one day when I just wanted to play, cutting strips and sewing them on, not even using fusible. The background is one of my Shibori prints , measuring about 9 1/2 by 14". It's been stuck on my design wall ever since. And I've been stuck as to how to proceed. 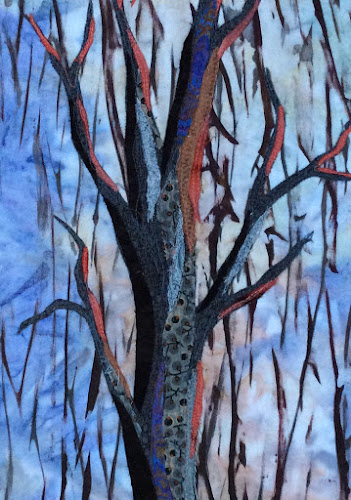 I have a general idea of the mood. My inspiration came from a particular part of the trail later in the day when the moon is in the sky and the low sun is casting beautiful soft colours across the sky.

I just haven't been sure how to proceed. Now, I have a few ideas. One thing I'm going to do is trace it or print out a few black and white copies and play with some ideas on paper.

Maybe a moon-- low or high in the sky--was thinking of an owl, but maybe not, some foreground brush, some pretty snowflakes.... 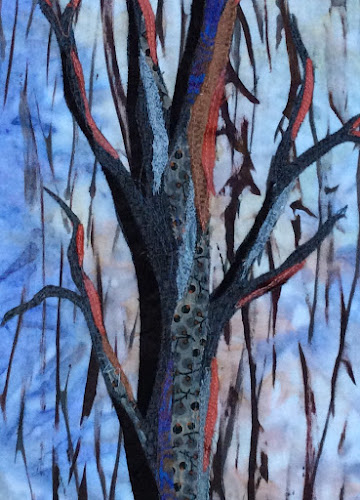 I ponder these things on such a day as this when I've gotten out on the trail and I need to stretch out with heat and ice. Like the turtle I will get to it eventually. Like I said in my last post, 'acceptance'.

Posted with Blogsy
Posted by HollyM at 11:32 AM

Wonderful colours in the tree trunks, lovely with your shibori background, all fits in beautifully.

I just love your work!

Mastering acceptance is huge. It looks to me like you are already doing it....and you have such a wonderful connection with Nature plus an amazing ability to translate your experiences into art. We are all the better for it. Happy Year ahead.

That is my favorite time of day, this piece is going to be amazing.
Hugs,
Meredith

Sheila, your piece is amazing, to me all it needs is quilting. Your background fabric was a perfect choice.

Holly, you can only get this kind of detail in a piece by careful observation of nature. Your walks in nature allow you to depict your life in your textile work. I respect that ability very much.

This is a beautiful beginning. I look forward to seeing how you proceed.
Happy 2016!

This piece is gorgeous. I love the tip of printing it out in black and white so you can play with it. Being a turtle is a good thing. They move slow enough to actually enjoy the journey.